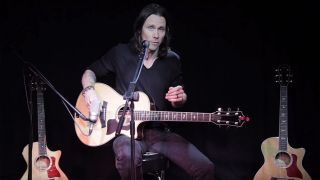 Alter Bridge frontman Myles Kennedy is seen in a trio of videos performing acoustically to promote the release of fifth album The Last Hero, on sale today.

He delivers Show Me A Leader, Watch Over You and Before Tomorrow Comes in a stripped-down style to mark the arrival of the follow-up to 2013’s Fortress.

Despite the album title, Kennedy said last month: “I don’t consider musicians or songwriters heroes. That’s a term for someone more special.

“As far as trying to be a positive role model or hopefully inspiring people in some way, I don’t take that lightly and try to do the best I can. You can never phone it in because you’ve been given a gift and an opportunity – not only create music but perform it all over the world.

“There’s a responsibility to not let people down and be the best you can. Hopefully, the people listening will pay it forward if they’re inspired – continue that musical passing of the torch.”