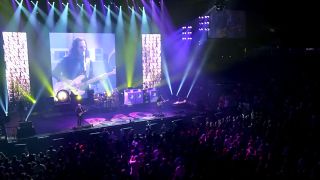 Rush have released a clip from their R40 Live DVD, showcasing their performance of Roll The Bones.

It follows the launch of the audio-only stream last week.

The show was recorded in Toronto in June, during what’s thought to have been the band’s last large-scale tour.

Guitarist Alex Lifeson recently said he believed it was their last – but added: “Whatever this tour is, it’s not the end of the band.”

R40 Live is released on November 20, with more details to be revealed in due course.