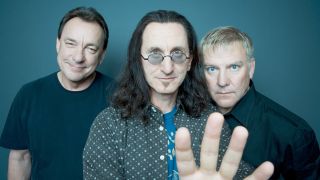 Rush will release a live DVD shot during their “final tour” in November, it’s been revealed.

It was filmed over two shows in Toronto in June, after the trio had announced a North American road trip that they expected to be the last of its kind.

The three-hour package includes a number of tracks that have never been played live before, or never previously filmed. A single of Roll The Bones will be released on September 25.

Fan site RushIsABand.com reports: “Unlike other concert DVDs where the look is the same throughout, this show has an extensive setup that changes multiple times. As the set list moves back in time, the stage setup reflects the band’s stage setup from that period in their career.”

R40 Live is to be launched on November 20 via Zoe, Rounder Records and Concord Music. No further details have yet been revealed.

Guitarist Alex Lifeson admitted last month that he believed the R40 tour was their last – but added: “We want to get through this and see where we’re at. We want to discuss whether we’re going to make another record. A lot of things. Whatever this tour is, it’s not the end of the band.”