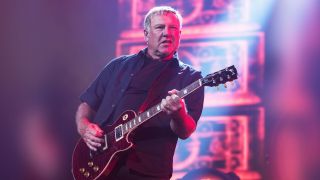 Rush guitarist Alex Lifeson has played down the effects of his arthritis, saying it isn’t preventing him from playing.

Frontman Geddy Lee said in May that he feared his colleague’s pain would be the main factor in ending their live career, saying: “It kind of hurts me to see him when he’s having a bad day, physically.”

But Lifeson tells That Metal Show: “You have to be careful what you say these days – I almost regret ever mentioning it in the past.

“Everyone thinks, ‘Oh, his hands. He’s got arthritis. That’s it, he can’t play.’

He adds: “I feel it, just like we all do as we get older, aches and all of that stuff – but it doesn’t impede my playing.

“It makes it a little more difficult, a little more challenging to do the fast stuff, and there’s a little bit of feedback that I get from it the next day. But it’s nothing that really stands in the way.”

Lifeson says: “It’s a three-hour show. We can’t get away from it. We were supposed to cut back on this tour. We can’t.

“I think in my gut this is the last major tour. I like to think we’ll do speciality gigs – maybe a week in New York, something like that – but we haven’t even discussed that.

“We want to to get through this and see where we’re at. We want to discuss whether we’re going to make another record. A lot of things.”

He emphasises: “Whatever this tour is, it’s not the end of the band.”