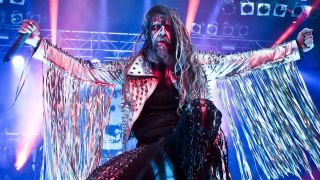 Shock-rock icon Rob Zombie has released a video for his track Get Your Boots On! That’s The End Of Rock And Roll.

Zombie was recently at the centre of controversy with John Carpenter, after the fellow movie-maker and musician called him a “piece of shit” in connection with comments made about his remake of Carpenter’s Halloween.

But Zombie later reported the problem had been resolved in a brief phone call, saying: “We talked for literally one minute and it was all good.

“It was just some misunderstanding and I said, ‘That’s not it at all, John – this is how I feel about that.’

Zombie’s released his latest film 31 across Europe last month and he said he had something completely different up his sleeve for a future project.

"I was so high my doll started talking to me": The confessions of Rob Zombie