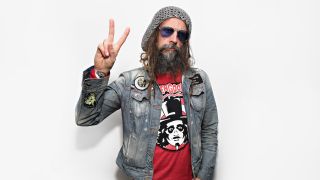 How did it feel to call Marilyn Manson a ‘punk ass bitch’ from the stage in 2012?

“Well… I kind of wish I did that backstage. It was kind of ridiculous. I hate doing stuff like that… but my emotions got the better of me . As soon as I get mad, I kind of lose it.”

What is the worst thing you’ve read about your band?

“That’s a long list, but probably the worst thing I’ve read was one of the first things I read. When White Zombie’s first Geffen record came out this magazine called Alternative Press reviewed it and the first line was like, ‘This is the worst band ever.’ And it went downhill from there!”

What would it take to reunite White Zombie?

“It wouldn’t be a financial thing, it’d take a reason to do it. That’s why it never happened, because there’s no reason to do it. I like playing with the band I’m playing with now much more than I ever liked playing with White Zombie. And I think people think they want to see it, but a lot of times bands reform and disappoint people. I don’t think there’s anything that could make it happen.”

“This was not recreational, but when I was a little kid for some reason I was so over- prescribed with drugs that I was on, like, seven different pills, and I remember sitting on my bed and my ventriloquist doll that was sitting by the window started talking to me – it was about 40 years ago and I still remember it clearly.”

“I went to see The Who with a friend who’s related to Roger Daltrey, so we went backstage and I knew I’d talk to Roger, so that was cool. But when I was leaving I ran into Pete Townshend and I was surprised how much I felt. Spontaneously being introduced to Pete Townshend kinda freaked me out.”

“Not really. I’m kinda proud of that, I don’t fear heights or snakes or anything like that. I probably should have fears of things, because sometimes I don’t worry about things I should worry about, I just have this feeling everything will work out fine.”

What was the moment you realised you’d made it as a rockstar?

“I was doing a charity event recently and was in the dressing room with Alice Cooper, who I’ve known for 20 years, and Gene Simmons, who I’ve known for a long time. And I got a picture of us three together and at that moment I was like, ‘Wow, this is a little odd’, because when I was a kid these guys were huge, I mean huge, larger-than-life, superstars as big as you can be. And here I am with them. That was one of those moments.”

“Many years ago a local radio station had a contest; whoever did the most extreme thing with the station’s ‘call letters’ got to meet the band. So one guy decided the best thing he could think of would be to take a razorblade and carve the letters into his chest. So the station was like, ‘Hey, meet Kevin!’, and in comes this kid with blood gushing from his chest where he’d carved it up. That was pretty weird I guess.”

Aside from property, what’s the most expensive thing you’ve ever bought?

“I bought an Argentinian Frankenstein poster, an original poster. There are only two left supposedly. I can’t remember what I paid for it – $50,000 or $70,000 – and at the time that was the most expensive useless thing I ever bought.”

Have you ever been arrested or come close?

“I’ve never actually been arrested, I’m quite proud of that, but I came close. Mainly on tour. In the early days of touring I had a big mouth and I’d say things like, ‘Hey, everyone come on down’ and suddenly there’d be hundreds of kids storming the stage. The amount of times I went onstage and there were police ready to arrest me was ridiculous. I always talked my way out of it.”

“Well, I hear it’s pretty good. People always say, ‘Oh wow, you’re a really good dancer’, although I would never ever get up and dance where people were dancing. But for some reason people think I’m a great dancer. And I don’t want to prove them wrong by dancing!”