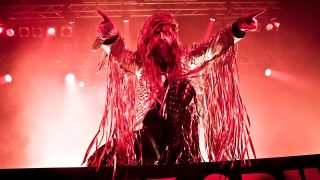 A few weeks before Halloween, Rob Zombie plays the final night of his worldwide tour in London town to a sold-out HMV Forum for a night of campy, trashy rock’n’roll. Here’s what we learned from the experience…

Maybe that goes without saying – this is a Rob Zombie show after all – but the amount of costume changes tonight are impressive. Spritely guitarist Piggy D arrives on stage in a monster mask and bat-wing jacket before changing outfits basically every second song. Guitarist John 5 grins to show a glowing light in his gob, and at one point comes out looking like some kind of swamp monster. It’s not just costume changes either: a glow-in-the-dark guitar, a bass in the shape of Frankenstein’s monster’s head with glowing eyes, a guitar that sports a video screen playing cartoons and a bass in the shape of a cross are all part of tonight’s armoury.

Anyone who’s seen one of Rob Zombie’s larger scale shows will be familiar with the magic box of tricks he brings to the stage: from dancing robots and skeletons to bursts of fire and flashing visuals – often from his B-movie-style horror films. But aside from the abundance of instrument changes, there is little in the way of props. It is by far one of the most stripped-down Rob Zombie performances you’re likely to see, but despite this, it’s also one of the most dynamic. Zombie’s voice is on fine form, and the energy leaps from the stage. Which brings us onto our next point…

Rob Zombie’s music would make the perfect soundtrack to a dingy rock ‘n’ roll strip club in one of his horror films. But hey, why let the ladies have all the fun!? Zombie commands the stage with his slinky dance moves: from shaking his dreadlocked mane to grooving across the stage to engaging in some mini-pole dancing with his mic stand – the man can move. He even showcases a spot of line-dancing for the Southern-tinged House Of 1000 Corpses. He’s got the energy of a man half his age, and you can’t take your eyes off him.

Sheri is on hand to help

Rob Zombie’s wife and scream queen star of most of his movies, Sherri Moon makes a couple of appearances tonight to the joy of the audience. They squeal and hold up phones as soon as she arrives on stage to bring Rob a couple of inflatable aliens for the song Well, Everybody’s Fucking In A UFO. They even share a quick peck that has everyone cooing.

Sure, it can be hard to drag yourself out to a Monday night gig in October, but once the party gets going it feels more like a Friday. The setlist is killer for Zombie fans. It has all the classics like Dragula, Superbeast and More Human Than Human, but fans also go wild for new songs: the frankly mad but fun Well, Everybody’s Fucking In A UFO has everyone singing along. The audience request Sick Bubblegum as part of the encore, and the band also play a mash-up of covers mid-way through: School’s Out and Blitzkrieg Bop, which are brilliant fun. Even after two sets of encores, nobody wants the party to end.