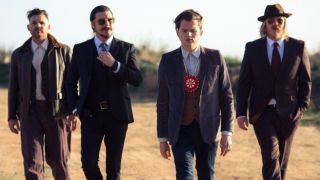 Rival Sons have announced a European tour kicking off in January.

The California outfit have planned a number of shows in the UK, Ireland and Europe from January through March. They’ve scheduled appearances in between their support slots on Black Sabbath’s The End tour – before the trek kicks off in full swing in February.

Drummer Michael Miley says: “We’re really excited to come back and play some shows for you. The Black Sabbath tour will be over by the beginning of February and we’ll be moving on to headline clubs in the UK, Europe – and Ireland, for the first time. We’ll see you soon.”

View the newly announced dates in bold below.

The band released their fifth album Hollow Bones earlier this year – which spawned singles Tied Up and Thundering Voices.

Guitarist Scott Holiday said of the album: “We tried to make something that’s familiar and sounds like us – but we also tried to challenge ourselves and our listeners.”