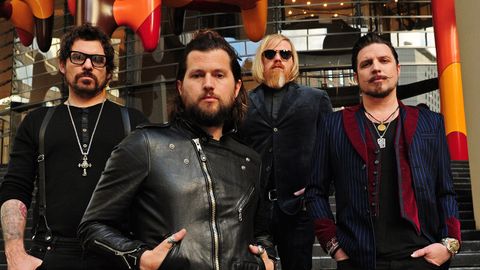 While not exactly a slow burn, the gradual ascendancy of Long Beach’s Rival Sons has been a measured, meticulously plotted journey borne out with hard graft, attention to detail and wise decisions. Not to mention rare talent, seemingly effortless musical cohesion and a handful of tunes that would be considered classic in any era.

Long since transcending the retro-stylists straightjacket, the fine-tuning and distillation of the band’s character along the way has been a most attractive spectator sport, added to and tweaked on successive releases. With luminaries as disparate as Ozzy and Henry Rollins tripping over themselves to spoon on the plaudits, with power comes great responsibility – or rather, with success comes great pressure to keep delivering. And yes, they do. And then some.

Any band could be forgiven a slight wobble or wrong turn on album five, but happily, there’s not a hint of it. Instead, strengths are built on, ideas expanded and all the experimentation is built upon tiny increments within the song structures themselves. Opener Hollow Bones Pt.1 (first of a themed two-parter analogous to Manifest Destiny on Head Down) swings into snake-hipped, lizard-lipped life with a guttural overcooked riff, acres of space and a layered call-and-response chorus that ticks the box marked ‘instant live favourite’.

The theme is continued on Tied Up, guitarist Scott Holiday’s octave pedal firing large on a monolithic, languorous descending riff, before the verse takes an instant left turn into gothic Americana territory: T Bone Burnett vamping in the bayou. It’s bold, unsettling and effective, illustrative of an inspired confidence and further reinforced when a riff most bands would build an album round is casually introduced, then faded out almost recklessly early.

These internal changes in direction are threaded throughout the album, often threatening to disjoint, yet always pulled off like a high-wire act, merely elevating the whole into masterclass territory. Another example is Fade Out – stripped-down soul meets portentous classic rock, chock full of restraint and nuance before morphing into an epic wig-out tinged with melancholy. They certainly know where to place a minor chord.

Jay Buchanan’s voice is superb throughout, equally capable of blues hoarse power, falsetto melancholia and cracked pathos – he could sing over a paper and comb and still elicit emotion. The centrepiece of the album is, unusually, a cover: Humble Pie’s Black Coffee – not to be confused with the Sonny Burke song popularised by Ella Fitzgerald, though the lineage is apt enough. Like the Rolling Stones, Clapton, Page, Beck et al, at heart Rival Sons are white boys in thrall to black blues, and the relish with which they attack the song and make it their own speaks volumes of their own heritage and trajectory. It’s seriously impressive, bolstered by a hyperreal production and edge-of-the-seat performance.

Known to work at speed – writing in the studio, recording for a mere three weeks, then on tour for the rest of the year – it’s a work ethic that’s nothing like workmanlike, and captures an energy and spirit much easier requested than executed.

Grammy-winning producer Dave Cobb is a stickler for detail. The guitar tones and drum sounds are worthy of a review in themselves, micro-nuanced even within a track, and set in a 3D space that both breathes and is right up in your face at the same time.

Hollow Bones Pt.2 brings out the big guns, riff-wise, channelling the spirit of Zeppelin’s In My Time Of Dying. Implorations to the Creator, Jesus and the Saviour mix with ‘hallelujahs’ and ‘Hare Krishnas’, updating cotton-field spirituals with an earthy pan-religious sensibility reflecting the band’s mixed beliefs: ‘choose your lord’ indeed.

The smart money is on Hollow Bones being a death metaphor, though Scott Holiday is reluctant to explain the esoteric cover reminiscent of Hipgnosis at their most impenetrable: post-apocalyptic wasteland, psychedelic coral, the breath of the last wolf? Like the contents, it’s well-judged and fitting, paying homage to rock’s golden age, when the unwrapping and divination of meaning in the artwork was as large a part of the ritual as the music.

In fact, that’s the band’s essence: respectfully updating the past with a considered modernity and their own flair. One could say they use every trick in the book but, of course, they’re not tricks at all.