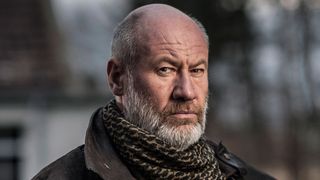 Fish has cancelled his touring plans for most of next year after being told to prepare for shoulder surgery that’ll leave him unable to perform until at least October 2017.

He’s been diagnosed with a torn tendon that’s in danger of detaching from its position, threatening his ability to use his right arm. He’ll undergo treatment next year – soon after recovering from previously-scheduled spinal surgery.

And it means his aim of retiring in 2018 has had to be abandoned.

Fish says via Facebook: “The operation is a small keyhole procedure – but the aftermath is truly a nightmare.

“I will have to have my right arm completely immobilised in a sling for four weeks, I can’t drive for six weeks and then I’ll have six months with intense physio to fully recover.

“It’s going to be long and painful, and if I don’t strictly follow the rules the tendon will tear again and may be irreparable.

“At the moment I’m suffering extreme pain from certain movements and I have been dealing with this for a few years, although not in continual intensity. Recently it’s become agonisingly intrusive.”

He believes the injury was sustained during a diving expedition off Cuba in 2010, then aggravated aboard a tour bus last year. He continues: “What this means is that there will be no festival shows next year, and I will not be able to go on the road until October 2017 without risking further damage. This is a huge blow on a number of levels.

“I have no other option but to cancel all touring until then, as I have to give this serious injury time to fully recover.

“I am trying to find the yang in all this as it means no gardening all season, no writing or typing for four weeks, no lifting or any strenuous movements for six months, and a rigid schedule of physio that will be extremely uncomfortable. It’s going to be an incredibly frustrating time.”

He’s planning to concentrate on his remaster series, along with writing material for his final album – but he admits: “It’s a crushing blow which has derailed all thoughts of retirement in 2018.

“My agents and my team are completely understanding and supportive and we just have to adjust to the realities of the situation. It’s not the greatest of news but by no means the worst. I can deal with it. After all, the best plans of mice and men aft gang agley!”