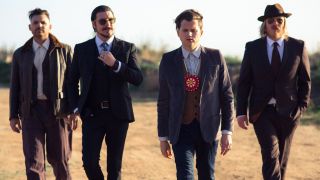 The follow-up to Great Western Valkyrie is for release in May, while the blues-rock outfit continue to support Black Sabbath on their final world tour.

Holiday tells Yahoo: “We tried to make something that’s familiar and sounds like us, because that’s what we are and that’s all we can really make in the end.

“But we also tried to challenge ourselves and our listeners.”

Meanwhile, he’s enjoying life on the road with Black Sabbath. “There’s a lot of blues in that music, which is great,” he says. “Heavy metal unfortunately seemed to ignore it at some point, and it’s almost invisible now.”

Holiday adds: “Not only do we get to do a Black Sabbath tour – we’re doing the last one. So no one else is getting in the door.”

Rival Sons frontman Jay Buchanan recently told Classic Rock that their upcoming album featured “different tones,” continuing: “These are definitely some of our heaviest songs on this record. – and at the same time there is at least one track that’s the lightest song we’ve ever recorded.”