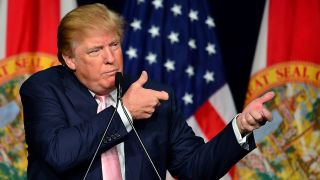 I’m still digesting it. I’m still gripped on the television screen, and I haven’t even put it all into perspective yet. I’m as shocked as most people in this country are. I’ve been talking to my sons today, and it’s scary times – it’s mind-boggling how many people voted for him, and just how fucked up the whole system is. It’s messed up and it’s sad.

I hear so many people right now, like ‘Oh, you know, he’s going to change the country’, and blah blah blah, and all this bullshit. But the fact of the matter is the reason people voted for him is the 18% decrease in taxes. That’s it, that’s what it’s all about – it’s all about money. People want more money, and that’s the reason why things like this happen. That’s why it went down this way, and that’s why we have a very scary situation here. I was saying this when they were running – and I’ve heard other people say it too – that he’s like Adolf Hitler. He is Adolf Hitler. He’s fucking Adolf Hitler. And He. Is. Scary. All of us should be really scared, and all of us should be prepared for the worst.

Another facet of his election is racism. We had an African American President, and there’s a lot of racist folks in America who were pissed about that. So, they went out and voted for the white guy. They’re not going to vote for the woman, and they don’t care about Latinos; they’re racist. So, we have a money-driven, racist, white, fucking world that we live in, that puts money-driven, white, racist Presidents in office. That’s the way it is. It’s racism – it’s white people. I believe that white people were the reason why Trump was elected President, because white people didn’t want an African American, or a woman. It was white people who put him in office.

I fear for immigrants. I fear for Muslims. I fear for my children. The scary thing is, when you have children you tell them ‘Hey, look, don’t be a bully. Don’t say fucked up things about women, don’t be a racist, don’t do these things’. And here we have a person who’s doing these things that our children get to see. And you just hope ‘Oh, he’s going to get rejected at the polls’, and that’s going to drive that point home to my children that you just can’t be like that – but then that guy gets elected. And it makes it super hard to explain that to your children, and then your children go on, and become adults, and they have a different philosophy engrained in them. So that’s really my biggest fear – what this is going to do to the mentality of future adults.

But I fear on every level. It’s healthcare, it’s what’s going to happen with the 20 million people who do have healthcare – Obamacare wasn’t the greatest thing in the world, but at least the thought was there. And… We’re gonna build a wall?! Are you kidding me? Is this really going to happen? Are we going to go over there and start building a wall? I just can’t imagine it. And we’re going to start deporting Muslims, and… It’s scary times. Really, I’m scared on every level.

America – they say we’re divided, and you look at how close the result was, and we are. I just hope that the 49 million people that voted for Hillary, and the other millions that voted for other people, continue to take to the streets and protest. Maybe something great will happen from that; that’s my hope. To me, it means make more music. Music is the platform I’ve always used for activism, so this lights a fire underneath me to make more music, and try to politicise people with that music.

Wakrat’s self-titled album is out now.