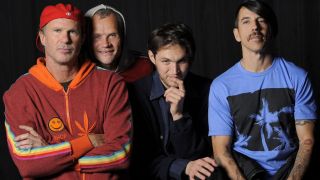 The’ve lined up seven dates this December in London, Glasgow, Birmingham and Manchester in support of their 11th studio album The Getaway, which was released in June.

Support on all dates will come from Japanese metal trio Babymetal, who launched their second album titled Metal Resistance in March this year.

Tickets for all seven shows go on general sale from 10am on September 2 through TeamRock Tickets.

The Red Hot Chili Peppers report that every ticket purchased will include a choice of either a physical or digital copy of The Getaway. Each ticket will come with one redemption code.

And every ticket purchased through TeamRock Tickets will also come with a three month free trial membership for TeamRock+ – which offers access to exclusive content from Metal Hammer, Classic Rock and Prog magazines as well as web-only content that can’t be found anywhere else.

Earlier this year, Chili Peppers frontman Anthony Kiedis revealed that the band scrapped 30 songs written for The Getaway and started again from scratch.

He said: “We had an unusually difficult experience making this record. We wrote 20 to 30 songs and it was all ready to go. We thought it was happening – then Flea went snowboarding and broke his arm real bad.

“Then we didn’t have a producer, and we were sort of lost in space with all these songs. When the dust settled, Danger Mouse emerged and said, ‘Let’s go make a record.

“We were like, ‘Great, we have all these songs!’ He was like, ‘Leave those there. Let’s go write new songs in the studio.’ So the process began over again.”