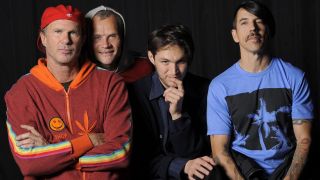 Red Hot Chili Peppers frontman Anthony Kiedis has described the making of 11th album The Getaway as “unusually difficult” – and revealed that they scrapped 30 songs written for the project and started again.

The follow-up to 2011’s I’m With You, produced by Danger Mouse, will be released on June 17. It’s been headed up with last week’s launch of lead track Dark Necessities, and arrives after running into scheduling difficulties caused by bassist Flea breaking his arm.

Kiedis tells KROQ: “We had an unusually difficult experience making this record. We wrote 20 to 30 songs and it was all ready to go.

“We thought it was happening – then Flea went snowboarding and broke his arm real bad.

“Then we didn’t have a producer, and we were sort of lost in space with all these songs. When the dust settled, Danger Mouse emerged and said, ‘Let’s go make a record.’”

He continues: “We were like, ‘Great, we have all these songs!’ He was like, ‘Leave those there. Let’s go write new songs in the studio.’ So the process began over again.”

Kiedis admits the band presented some “pushback” against the producer’s approach, but adds: “He just wanted to see what would happen when we went in and started something fresh.

“The only way we saw this working was to trust him – get rid of our old ideas and our old way of doing things.”

The Red Hot Chili Peppers play a number of European festivals during the summer, including headline sets at Reading and Leeds in August.