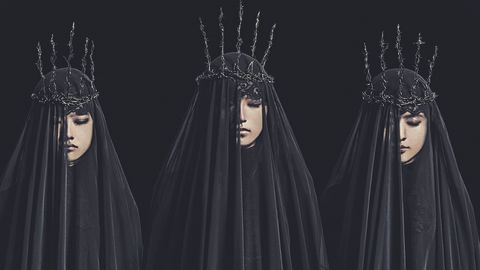 Let’s be honest: you’ve made your mind up about whether Babymetal are a good thing or an inexplicable monstrosity by now.

As a result, those in the latter camp might as well stop reading because Metal Resistance puts paid to all notions of a backlash. A bewitching and bewildering anomaly in our world over the last couple of years, the kitsune-wielding scamps have pulled off the frankly mindblowing trick of winning over huge numbers of diehard metalheads while, perhaps a little oddly, annoying the piss out of those who prefer their shameless gimmicks to be hidden under a layer or two of ‘authenticity’ – whatever that might mean in the mainstream world.

The truth is that Babymetal have become a phenomenon because the entire package – from all that endearing guff about the Fox God and the remorseless enthusiasm of the band’s three vocalists, through to the kaleidoscopic pomp of the tunes themselves – has been put together with such care and finesse. Metal Resistance is destined to be a wildly successful record, but not because of some fleeting trend. Instead, it’s because these songs get the balance between barking-mad genre juxtapositions and razor-sharp pop-meets-metal songwriting just right. Once you factor in a production job that goes beyond state of the art and into some gleaming and demented futuristic realm where music actually can erupt from your speakers and give you a slap, and Babymetal’s rise to global enormity seems less like a point for discussion and more like a mission accomplished.

For some naysayers, the question of whether Babymetal are a bona fide metal band or just some cynical perversion of cherished values remains a real sticking point. But here’s the answer: of course they’re a fucking metal band, and a far more convincing one than the majority of those who have attempted to blend heavy music and shiny pop in the past. There’s a reason why the average Slayer fan is far more likely to enjoy this album than anything by, for instance, Issues or Falling In Reverse, and that’s that when Babymetal play metal, it sounds like a) the people behind the creation of these songs actually know what they’re doing and might even own a Megadeth album or two; and b) they actively want to drag metal fans along with them.

That doesn’t detract from the incongruous presence of harmonised squeaky voices over the top of brutal 21st-century metal riffs – it is, and probably always will be, intermittently hilarious – but once you bat away your instinctive objections to anything ‘pop’ being assimilated into heavy metal, Metal Resistance will have its fox claws embedded in your heart forever. Power metal fans, in particular, are advised to dive in without hesitation: both opener Road Of Resistance and Amore are outrageous in their hijacking of Helloween’s full-pelt blueprint and Meta Taro is simply a symphonic folk metal anthem. But you don’t have to be a massive fan of Dragonforce or Korpiklaani to buy into this: KARATE is as punishing and infectious as any recent metalcore song; From Dusk Till Dawn welds lurching goth-rock riffs to the jarring wub-wub of lobotomised brostep, and Tales Of The Destinies is an insane tech-metal sprawl with enough polyrhythmic twists to make Periphery’s eyes water.

So are you in or are you out? If you’ve read this far, you’re probably in. Good. Babymetal are here to stay and Metal Resistance is a ludicrous but brilliantly executed delight.