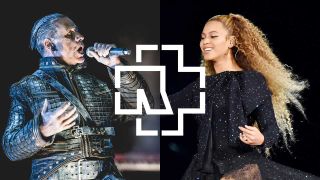 Celebrity mash-up wizard DJ Cummerbund has uncaged his latest bootleg, and we fear it might actually break the internet

This time, our mystery man's feat of sonic alchemy is to combine the brute force metal of Rammstein with one of modern R&B legend Beyonce's biggest choruses. It's Waidmanns Heil versus Crazy In Love, and it's literally awesome.

Adding to the madness are a perplexed looking Jay Z, some shouting from Metallica's James Hetfield, and and a solo from Kirk Hammett.

"Queen Bey felt the need to get heavy," says Cummerbund, "so she joins Rammstein and friends on stage to brutally beat the audience into sonic submission."