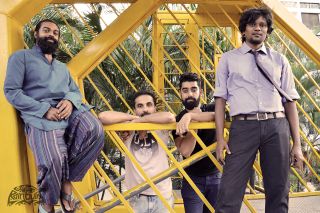 Indian prog rockers Rainburn have premiered their new video, a live rendition of  Suicide Note: Alive in Black, with Prog. You can watch the video in full below.

The track was recorded live in July of this year, and is part of a 5-song EP called Resignify that will be released on November 7, the one-year anniversary of the band's last full-length album Insignify. Resignify consists of live cuts, some radical reworkings of songs from Insignify and one re-recorded track from the band's debut EP, Canvas of Silence.

"Suicide Note was probably the most-liked song from our debut album Insignify that we released last year, and the best-received song when we went on tour," singer and guitarist Vats Iyengar tells Prog. "This recording is from a show we did in our hometown, Bangalore, a few months after the tour ended, and it really shows the teeth of this band as a live act. It's the opening song on an EP called Resignify that we're putting out to coincide with the one-year anniversary of Insignify (7 November 2019). The song is called Suicide Note: Alive in Black, and there's also a version called Suicide Note: Fading into White that closes out the EP, which will surprise a lot of people who are familiar with the original.

"Besides these two, Resignify consists of one more live recording from the same show (Someone New), a pretty radical makeover of Elusive Light from Insignify, and a re-recording of a song called Veil from our first EP. I think, more than anything else, it's the two reworked songs from Insignify that really showcase the breadth of Rainburn's music."

The full track listing is: