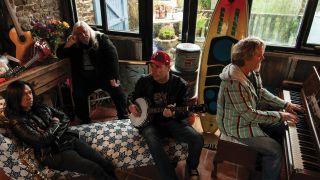 Pendragon have released a tease video for their forthcoming new album Love Over Fear, which you can watch in full below.

"I wanted to go back to meaningful guitar solos and use sounds similar to albums that I loved in the 70s, so there are tons of 12 string guitar sections, mellotron strings and very melodic keyboard parts," says mainman Nick Barrett.

The band will release their tenth album in February in various formats. The 3CD deluxe book edition, featuring  a whole collection of cover artist Liz Saddington's paintings to illustrate all the album's songs will ship in early February.

This will be followed by the gatefold-sleeve, double splatter coloured vinyl edition and the digi CD version later in the month.

Pre-orders for the new album begin on December 1 from the Pendragon website.

Pendragon then undertake a lengthy world tour beginning in February.