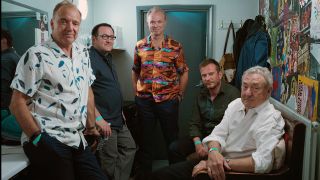 Nick Mason’s Saucerful Of Secrets have added a further four shows to their 2020 UK tour.

Former Pink Floyd drummer Mason is joined in the lineup by Gary Kemp, Guy Pratt, Lee Harris and Dom Beken, with the band initially revealing a run of 13 shows in the UK and Ireland back in September. However, due to demand, they’ve tacked on four more – in Guildford, Brighton, Oxford and Ipswich.

In addition, the group – who play early Pink Floyd material, including tracks from The Piper At The Gates Of Dawn and A Saucerful Of Secrets – have also revealed a European tour, which will take place throughout May and into June.

Speaking previously with Billboard, Mason admitted that revisiting Floyd’s early material wasn’t easy when the project got under way – and called the process “challenging”.

Find a list of dates below, with the newly announced shows highlighted in bold.