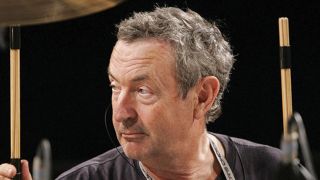 With The Endless River wrapping up Pink Floyd’s legacy last year, Prog wanted to see what drummer Nick Mason was getting up to.

Outside of the world of music, Mason is passionate about cars and racing, and even wrote a book on the subject, 1998’s Into The Red… But he still makes time to support the musical world, and is co-chairman of the Featured Artist’s Coalition, which works to defend and promote musician’s rights. During his time in Pink Floyd he was known as somewhat of a mediator between other members of the group, but was this true? And how have his relationships with the other band members held up? We discuss this and more with the drummer.

Do you feel The Endless River album was a satisfying way to wrap up Floyd’s recording career?

Yes I do. I’m glad we did it, if only because it gave Rick Wright some deserved recognition. What was nice about it was the relaxed feel it has. We had become so structured over the past 45 years, so it was nice to go with the flow, and be a little less regimented. More ambient, if you want to put it that way.

One thing I have been thinking of doing is taking drum lessons. I have never had a lesson in my life!

You’re seen as something of a bridge between Gilmour and Waters. Is that a tribute to your diplomatic skills?

I’ve always thought of myself as a Neville Chamberlain character, waving a piece of paper proclaiming ‘Peace in our time’, and then watching as Poland’s invaded! Both have had issues of recognition, and continue to have them.

Can you see yourself working with either again on a project?

Oh, I would work with either of them at any time they wanted me. I get on very well with both.
I just filmed a promo snippet for Roger’s film The Wall, and that’s now being included in it. He’s still one of my closest friends.

Do you feel your role in Floyd has been undervalued?

I think it’s been overrated! Because I was in such a successful band, I am regarded as being better than I am. The trouble with any big band is that there’s only so much recognition to go round, and you do have certain musicians, like George Harrison, who do not get the respect they deserve. But that’s not the case with me.

You’ve not released a solo album since 1981’s Nick Mason’s Fictitious Sports. Any plans for a new one?

It’s not something on my agenda. In fact, the Fictitious Sports one was really a collaboration with Carla Bley, who wrote all the songs. The reason it came out under my name was because I had a solo deal at the time. The same is also true of the three albums I did with Rick Fenn and also the ones I recorded with Michael Mantler. None could be called solo records. I doubt very much I would ever now consider doing a proper solo album. Does the world really want an album from a drummer?

You produced several artists in the late 70s – Wyatt, Gong, Hillage, The Damned – would you like to do more of this?

The problem is that I wouldn’t want to commit myself to doing a project that locks you in a studio for six months with an artist. That would be very boring. I have done the occasional bit of production work since those albums you mentioned, and I have had other offers over the years to work on records in that capacity. But I can’t ever see myself returning to the studio as a producer on someone else’s music.

What are your musical ambitions now?

What I won’t do is put together a new band. I’m too old for that kind of thing. All I want to do is carry on playing and really doing what I do anyway. There’s no burning desire to achieve particular goals… well, there is one thing I have been thinking of doing and that’s taking drum lessons. I have never had a lesson in my life, so perhaps it’s time for me learn where I’ve been going wrong!

From your role in the Featured Artists’ Coalition, how tough do you think it is for a young band to make an impact now?

Yes, it is so much harder. The whole music industry has altered, in the sense that 40 years ago, an artist could sign to a label and know that they’d get the time and backing to make their mark. Now, there isn’t the same support system in place. So, a musician has to be a lot more entrepreneurial than previously. I think there’s too much music out there. Inevitably, a lot gets lost. Like most people, I’ve loads of tracks on my computer which I’ve never heard.

Do you actively encourage young bands?

I have mentored three or four through The Roundhouse Music Collective, and that’s also where I put my production skills to work. I try to listen to emerging artists when I can. But what I can do is very limited.

You’re known for your love of motor sport. Is this something you still actively pursue?

Not really. I’m getting too old for that sort of thing. My wife still races, and so do other members of my family. And I am still very passionate about racing. Well, I grew up with it, because my father, Bill, not only raced but also made documentaries about the sport.

Which came first for you, motor racing or rock’n’roll?

Oh, the racing. But then I bought See You Later Alligator by Bill Haley & The Comets, and that’s how I discovered rock’n’roll. From there, I moved quickly on to Elvis and then to Chuck Berry. That Bill Haley single was a 78… now, that’s an idea. We could bring back the 78. Maybe we should reissue the entire Pink Floyd catalogue on that format. I must exercise my diplomatic skills and persuade Roger and David that this is a good idea!