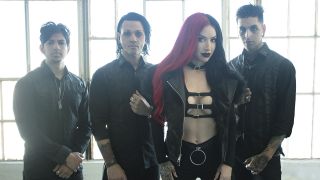 New Years Day have released a video for their track Skeletons.

The song has been taken from the band’s 2019 album Unbreakable, with vocalist Ash Costello saying the track has been “a favourite among the New Years Day fan community since day one.”

She adds: “Something about this song resonates. The right mix between heavy, soft, strong and soft vocals really made it stand out on our record from the rest. The song is about opening up and letting who you hide inside come out, so for that reason, I performed the song alone on the music video.”

Costello adds: “It’s tough because it makes you vulnerable as a rock frontwoman to be without your band, but it changed the performance into something pretty unique from our other music videos. I hope everyone enjoys it."

Unbreakable is New Years Day’s fourth album and it was produced by Mitchell Marlow who has previously worked with artists including In This Moment and All That Remains.

Speaking previously with Metal Hammer, Costello gave an insight into the writing and recording process behind the follow-up to 2015’s Malevolence.

She said: “We’ve always been rushed on every record because of our busy touring schedules, so we’ve never found the time to just write naturally.

“Malevolence was recorded in the month before Warped Tour 2015. It was very draining and I didn’t get the exact product I desired.

“I tried to find the most honest and dark places I was going through at the time but I’m tired of slicing open a vein and bleeding everywhere for a record. I’m starting to realise I don’t have to.

“I can still write authentic, emotional lyrics but paint a more fun picture with them now I’m in a much happier place.”