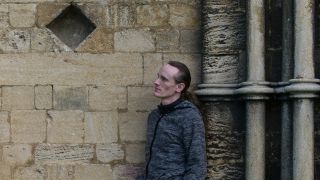 British prog metallers My Soliloquy have released a new promo video for their song Confluence.

The band, helmed by former Threshold guitarist Pete Morten, released their latest album, Engines Of Gravity, last September, from which the track is taken.

"Confluence is the second single from our new album, Engines Of Gravity and it's about romantic relationships," Morten tells Prog. "But the songs message can quite easily be relevant to parent/child relationships, friendships, working relationship, etc... Simply put, when two individuals meet, they bring with them all their history and complexity, and as they merge, like a "confluence" of rivers, the dynamic is set and dictates how both parties will experience that relationship. You see, they are both forces of nature, and  like two rivers merging, when they collided, the energy of both combined is complex and powerful. The lyrics are basically asking us to always enter into any kind of relationship with an open, honest, and generous heart."

In the meantime, Morten will be undertaking two events in aid of the Born Free Foundation charity.

"Regarding the two charity events I'll be involved in later this year, I have written a new song, as a dedication to the Born Free Foundation. They carry out vital work throughout the world, to protect endangered species and habitats, and to end animal suffering wherever they may find it, as in circus's and zoos, for example. Animals are often kept in the most horrific conditions in these circumstances.

"I've followed the foundations work for around 10 years, and I've wanted to record this song, for almost as long, but with touring and recording always getting in the way, I never quite found the time to do it. Well, in January, I finally resolved that this year will be the year that it happens.

"So, I'm booked in with Rob Aubrey again (Marillion, Spocks Beard) in August, to record the song, which will simply be called Born Free. Not only is it a dedication to them, but it carries a message of compassion too. The song - as a download only - will go on sale September 1st.

"As well as revenue from single sales going to the foundation, I'm hoping to raise even more money, by undertaking a sponsored 140 mile bike ride in the first week of September. Precise dates for the ride are not confirmed yet, but stay tuned for those.

"I recently did an interview with BBC Radio Lincolnshire to promote the new video and charity single/bike ride, and you can hear that below."