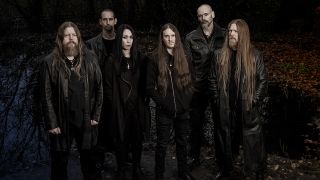 My Dying Bride have released a video their track Your Broken Shore.

The band debuted the song last week, with the new video shot in Yorkshire by photographer and director James Sharrock.

It’s the first taste of new material from the UK outfit’s upcoming studio album The Ghost Of Orion, which will be released on March 6 on CD, black 2LP gatefold, white 2LP gatefold, red 2LP gatefold and picture disc 2LP gatefold through Nuclear Blast.

Frontman Aaron Stainthorpe says: “The first song from My Dying Bride for five years comes laced with passion, power and an unyielding desire to create the most thoughtful and heavy music possible.”

My Dying Bride will play at this year’s HRH Goth festival on September 12 and 13 at London’s Forum Kentish Town and the Sheffield O2 Academy. They’ll be joined on the bill by other artists including Fields Of The Nephilim and KMFDM.