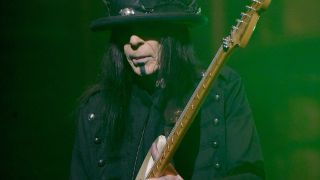 Motley Crue made headlines around the world earlier this week when they announced their live return.

The band ended months of touring speculation by posting a video showing the destruction of their famous cessation of touring contract. All four Crue members signed the legal document in 2014 ahead of their final tour, which indicated they would be sued if they ever toured under the Motley Crue name again.

Now, That Metal Show co-host Don Jamieson has unearthed a clip showing himself and Eddie Trunk interviewing Motley Crue’s Mick Mars back in 2014… and the guitarist makes quite a claim in the footage.

Mars then added: “Let me put it this way if that happens, I will invite the world to come for free.”

Posting the clip on Twitter, Jamieson says: I always said they’d be back. My redemption tour starts today. And great news… free tickets for all Motley Crue fans!”

Trunk then retweeted the post, saying: “Wow! This is amazing. What a fun episode this was with Mick Mars, but I totally forgot he said this. Here’s one tour that won’t be expensive I guess.”

Just hours before the Crue announced their live comeback this week, rumours began to build that they would be announcing a US summer tour with Def Leppard and Poison. Nothing has been officially confirmed yet, though.

While Motley Crue originally called time on their live career on December 31, 2015, they reconvened in the studio in 2018 with producer Bob Rock to lay down the new songs for the film: The Dirt (Est. 1981), Crash And Burn, Ride With The Devil and a cover of Madonna's Like A Virgin.

All four tracks appeared on the soundtrack to their hit Netflix documentary The Dirt.

I always said they’d be back. My redemption tour starts today. And great news...free tix for all Mötley Crüe fans! pic.twitter.com/Twr3BOSNqZNovember 20, 2019

Wow! This is amazing ! What a fun episode this was with @mrmickmars @MotleyCrue ... but I totally forgot he said this.. until a caller reminded me today. well here’s one tour that won’t be expensive I guess #FreeTicketsToTheWorld thx to @ThatMetalShow ! https://t.co/HbjfKBDhjHNovember 20, 2019