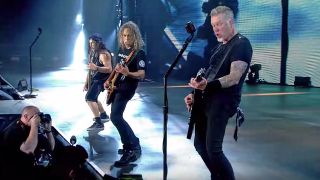 Metallica have released a video featuring their live debut of latest track Hardwired, shot in Minneapolis over the weekend.

The first taste of upcoming album Hardwired… To Self Destruct was revealed last week in the run-up to the opening event at the city’s US Bank Stadium, which was broadcast across the world as it happened.

Drummer Lars Ulrich revealed that, since the double-record had been recorded on an instrument-by-instrument basis, Metallica hadn’t played Hardwired together as a band until five days before the show.

He told Rolling Stone: “I’ve been getting lots of cool texts from buddies, talking about how much they’re digging the new song. It’s a good time to be alive.”

He added: “That’s actually the last song we wrote for the record. We started this album by throwing different ideas around. The shape of it, as a collection of songs, didn’t come into focus until we were deep into it. At that point, the songs were getting tighter, shorter and leaner.

“A couple of months ago, we were taking stock of the record and thought maybe we should write one more fast, little crazy song, and that became Hardwired. It just kind of happened. I think James and I wrote and recorded it in less than a week – which, for us, is basically a nanosecond.”

Hardwired… To Self Destruct will be released on November 18.

The Good, The Bad and The Ugly: The Best Reactions To The New Metallica Song