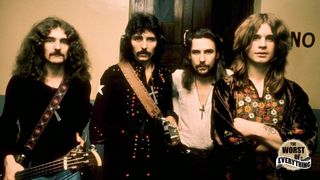 Everyone sensible loves Black Sabbath. That’s a fact and you’re welcome to it. But despite the seminal, pioneering and resolutely monstrous glory of the British legends’ many and much-celebrated creative peaks, there have been plenty of missteps, stumbles and sliced shots over the course of the last 48 years, and we don’t just mean that iffy album with Glenn Hughes on it. Brace yourselves, myopic fanpeople, because here are the ten worst Black Sabbath tracks of all time. They’re all terrible.

Never mind that Ian Gillan never really fit as Black Sabbath frontman or that Born Again boasts one of the worst production jobs of all time, the real horror lurking within the band’s mid-‘80s dalliance with the Deep Purple vocalist are the lyrics to this otherwise innocuous, mid-paced stomper. ‘Keep away from the digital bitch!’ shrieks Gillan in the chorus. ‘She’s so rich, the digital bitch!’ Yeah, brilliant. Thanks for that, Ian. Off you toddle.

What do you want from Black Sabbath? It’s riffs, isn’t it. Massive, thunderous riffs that make the floor shake and your bowels rumble. So you don’t want four-and-a-half minutes of plodding, overwrought AOR splooge instead? No, didn’t think so. Some bands do this stuff brilliantly, but this sounds like Magnum at the wrong speed. Thumbs down.

Okay, so this shimmering splurge of creaky psychedelia is not actually that bad viewed entirely out of context. The thing is, when Black Sabbath recorded 13 they must have purposefully recorded this song knowing that, basically, it’s the one that sounds a bit like Planet Caravan. You can’t pretend it isn’t without looking silly. And, it almost goes without saying, Planet Caravan is far better, which makes this a wholly redundant exercise.

“It’s not supposed to be a proper song!” we hear you cry. Whatever. FX is one minute and 43 seconds of daft echoey noises. Just imagine how stoned the band were when they recorded this, quite possibly believing that they would blow people’s minds with their inspired sonic explorations. Thank Satan the rest of Vol.4 was genuinely mind-blowing, because this is twaddle.

The only Sabbath album to feature Glenn Hughes on vocals, Seventh Star is not exactly overburdened with great moments, but it does occasionally sparkle with a rather endearing AOR sheen. Heart Like A Wheel, on the other hand, is just a turgid blues jam with a chorus so feeble it sounds in desperate need of a decent meal and a good night’s sleep. And it goes on for about an hour.

It is a testament to the imperious power of Tony Iommi’s greatest work that most of us tend to ignore his occasional clangers. But even the most charitable fan must concede that inviting Ice-T to mumble over the bridge of this opener from 1995’s largely forgettable Forbidden album was a goof of epic proportions. Yes, Ice’s mate Ernie C was producing the album but this is Black Sabbath, not Linkin chuffing Park. Yeesh. Even a couple of solid riffs can’t save this fiasco.

When Black Sabbath are on form, regardless of who is singing, the world is a wonderful place. As a result, when Tony Iommi momentarily switches off and slips into leaden blues-rock mode, it’s horribly disappointing and rather tedious. The weakest of the five albums singer Tony Martin made as Sabbath frontman, Forbidden is still a vaguely likeable effort, but this utterly anonymous shambles should never have made the cut.

An unmistakable chunk of filler from Forbidden, and this one is even less memorable than Sick And Tired. I’ve listened to it three times in a row before writing this, and I still couldn’t whistle a single riff or melody line from it. The pacey rhythm is quite lively and the drummer (Cozy Powell) is having a splendid time, but the rest suggests that the entire band are making it up as they go along.

Tony Iommi has written so many classic riffs and influenced so many generations of musicians that it seems a bit churlish to berate the great man for not being permanently god-like. Unfortunately, Born Again still sounds like it was recorded in a wheely-bin and Hot Line is still a song that is unlikely to have stuck in the memory of the men that wrote it, let alone we poor sods.

Oh come on! Yes, we all love Bill Ward and wish that he would return for one last hurrah with his estranged former comrades… but It’s Alright is abysmal, pop-rock dreck and a golden example of that dreadful phenomenon of bands “letting the drummer sing one”. Remember Beth by Kiss? That’s shit, too, but not this shit.

Black Sabbath: the madness behind Master Of Reality