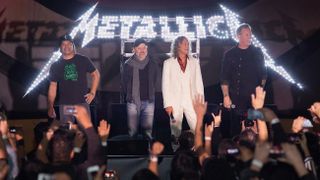 The band’s 10th album is released on November 18 and they’ve announced that almost 100 US record stores will open at 11.59pm on November 17 (Thursday) to allow fans the chance to buy the record the minute it is officially released.

“Stores will be stocked with music, prizes and cool stuff including limited edition vinyl slipmats and posters to give away free with purchase.”

The announcement comes after the band revealed they’d launch the album in the UK with an appearance on Daniel P Carter’s Radio 1 Rock Show from 7pm on November 17 before heading to HMV Oxford Street in London for a signing as the clock strikes midnight for launch day.

Metallica will also play a live show at London House Of Vans on November 18.

Meanwhile, Metallica have released pro-shot footage of their recent acoustic set at the 30th annual Bridge School Benefit at the Shoreline Amphitheatre in Mountain View, California, last month. It can be viewed below.

The thrash giants are the cover stars of the latest edition of Metal Hammer, on sale now in print and via TeamRock+.

Metallica fans collect 9 tons of food for charity in Colombia