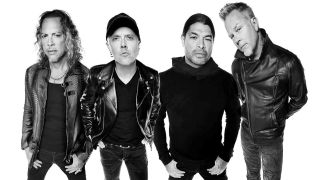 They appear on highly-anticipated album Hardwired… To Self-Destruct, which is released on November 18.

Atlas, Rise! was launched on October 31 and it’s reached No.22 on Billboard’s Mainstream Rock Songs airplay chart. Hardwired, the first track to appear, makes No.23 and Moth Into Flame sits at No.6.

Billboard say: “It’s the first time an act has tripled up since… Metallica did it eight years ago.

Bassist Robert Trujillo tells WAAF: “Whenever you’re releasing something new and testing it out in the universe, you would hope that people embrace what you’ve done creatively.

“We always feel good when people like what we do, and if they don’t, we get over it – we have to.

“But it seems like already, with the three songs that have been released, there’s been really, really good, positive feedback and they’re digging the vibe, so it makes us happy.”

The latest addition to Metallica’s WorldWired tour schedule is an appearance in Berlin, Germany, on November 14. The thrash giants are the cover stars of the latest edition of Metal Hammer, on sale now in print and via TeamRock+.