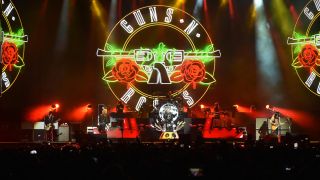 As Metallica gear up to release their 10th album Hardwired… To Self-Destruct on November 18, Hammett commented on Guns N’ Roses – who are on the road with Axl Rose, Slash and Duff McKagan from their classic lineup for the first time since 1993.

And the fact that GNR have not recorded any new music and have been playing only their classic hits is “sad” to the Metallica guitarist.

Hammett tells the Los Angeles Times: “Unfortunately, they’ve turned into somewhat of a nostalgia act, which to me is kind of sad.”

He adds: “I don’t want to think we’re trying to stay young by writing new stuff, but it makes us feel relevant. It makes us feel like we’re still progressing.”

Metallica are the cover stars of the new issue of Metal Hammer magazine. In an exclusive interview in the new issue, Hammett explained how he felt excluded from the writing sessions for Hardwired… To Self-Destruct.

He said: “For me, being in this band, I always want to contribute. I always have a lot of musical concepts and ideas to bring to the table. Obviously, that was not meant to be this time, and I had to accept that fact.”

Metallica will celebrate the launch of the forthcoming record with an intimate show in London’s House Of Vans on November 18.