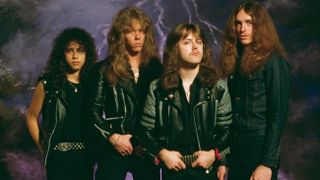 Metallica frontman James Hetfield believes late bassist Cliff Burton would have been resistant to the path the band eventually followed.

Burton died in 1986 as Metallica were on the road in support of that year’s classic album Master Of Puppets. And the follow-up …And Justice for All, released two years later, is notorious for how then bassist Jason Newsted’s bass is so low in the mix.

Hetfield is confident Burton wouldn’t have allowed that to happen and he also thinks Burton would have had something to say about later albums Load and Re-Load, which he describes as “the U2 version of Metallica.”

In an exclusive interview with Metal Hammer, Hetfield says: “I certainly would have thought there would have been some resistance, for sure. When I go back and I listen to …And Justice For All, it couldn’t have stayed on that path.

“We needed to bring in another set of trusted ears. I think Cliff would have probably interjected some different stuff, getting his bass heard and some more musically challenging things, probably.

“I would certainly think that Load and Re-Load, I would have had an ally that was very against it all – the reinvention or the U2 version of Metallica.”

Hetfield adds that he personally was “not at all” happy with the Load and Re-Load era of Metallica.

He adds: “There’s some great, great songs on there but my opinion is that all of the imagery and stuff like that was not necessary. And the amount of songs that were written – it diluted the potency of the poison of Metallica. And I think Cliff would have agreed with that.”

Metallica release their 10th album Hardwired… To Self-Destruct on November 18. The thrash giants are the cover stars of the latest edition of Metal Hammer, on sale now in print and via TeamRock+.