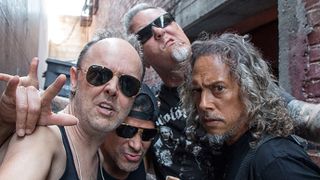 Metallica’s 10th album “will be done this summer,” according to drummer Lars Ulrich.

The band will decide on a title and tracklist for the long-awaited follow-up to 2008’s Death Magnetic next month, and barring “some sort of cosmic reason,” it’ll be issued in 2016.

Ulrich tells Metal Forces: “We’re now coming towards the end of the musical creative process and we’re starting to look ahead and the process of how we’re gonna share this record with the universe.

Metallica have been working with Death Magnetic producer Greg Fidelman at their headquarters in San Rafael, California.

Ulrich adds: “Greg Fidelman is 24⁄7 on this record and has been since last summer. He’s doing an insanely great job and has been putting his heart and soul in it pretty much every waking moment of his life in helping us engineer and produce this record.”

He continues: “If the record doesn’t come out this year then it won’t be because it’s not done. It will be because there’s some sort of cosmic reason that it would be smarter to hold onto it until next year. But the record will be done this summer.”

Metallica perform at the US Bank Stadium in Minneapolis, Minnesota, on August 20.

Metallica reveal they tried to buy their old garage for inspiration