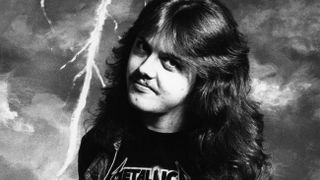 Zazula managed the band for a spell from 1982 and recalls James Hetfield’s early nerves over handling lead vocal duties. One proposed suggestion was moving Ulrich from the drum stool to the mic.

Zazula tells Metal Hammer: “Lars and I planned a lot of stuff. But James wasn’t the most confident of singers. I don’t think he felt comfortable.

“At one point there was even talk of Lars becoming the frontman. For about five seconds.”

Hetfield soon came into his own as the band created their 1983 debut Kill ‘Em All.

Metallica are the cover stars in the latest issue of Metal Hammer magazine, which explores the creation of Kill ‘Em All in detail.

The band – who are working on their 10th album – recently reissued Kill ‘Em All and its follow-up Ride The Lightning.