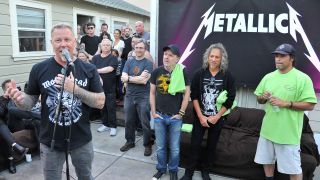 Metallica revisited their roots on Record Store Day by returning to the San Francisco Bay area house they called home in their early days.

After delivering a 9-song, 55-minute set at Rasputin Music in Berkeley, CA that featured tracks from their 1983 debut Kill ‘Em All and 1984’s Ride The Lightning – remastered and expanded editions of both were issued on April 15 – the band returned to 3132 Carlson Boulevard in El Cerrito, CA on April 16.

Metallica relocated to the Bay Area from Los Angeles in 1983 to play with bassist Cliff Burton, going on to write and rehearse much of their second album and 1986’s Master Of Puppets in the garage at El Cerrito.

The band were joined on their return by family, friends and crew, with Mayor Greg Lyman presenting the group with a proclamation marking their roots in the city.

James Hetfield reflected: “This is unbelievable to be back in this place. I think we’ve all kind of forgotten a lot of stuff that’s happened in our history and this is a great way to jog our memories and to see people’s faces here, as well. We are so grateful for everyone that’s here and has been a part of this with us.

“We’re just extremely grateful to still be rocking and playing after all these years, doing what we love doing…that doesn’t happen to everybody.”

Lars Ulrich revealed the group had plans to revisit El Cerrito with an ulterior motive in mind.

Ulrich told the crowd: “A couple of years ago, we thought it would be cool to come over and see if we could buy the garage from the people who lived here, and we were going to put it inside HQ over in Marin, but the garage is long gone.

“Whoever’s got the garage, please return it, because maybe we would finish the new record quicker if we were in that garage.”

Metallica continue to plug away at their 10th album, with tentative plans to release the follow-up to 2008’s Death Magnetic before the end of the year.