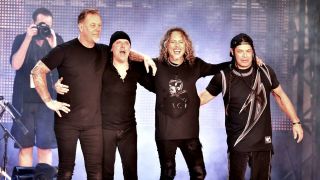 Lars Ulrich says Metallica have driven themselves “nutty” agonising over their new material.

The band are at work on their 10th album and the drummer expects to wrap up recording sessions “this spring.” But he admits that the nine months they’ve spent working on it so far have, at times, been frustrating.

Ulrich tells Rolling Stone: “Nowadays, we sit and go, ‘That’s a great piece of music,’ and ‘That’s really cool,’ and then we’ll play it faster, then slower, then half a step down, exploring all these options. There are 75 different ways to play something, and you end up fucking driving yourself nutty.

“I think it will be a pretty in-your-face year, at least the back half of it. Obviously, we’ve gotta finish the new record now. But thankfully we’re quite far along.

“Hopefully we should be able to knock that on the head this spring, I would guess. So we will be gearing up and playing shows and doing all that fun stuff again soon.”

Late last year, Metallica released a clip of frontman James Hetfield playing a snippet of a track from what will be the follow-up to 2008’s Death Magnetic.

Ulrich adds that being in the band keeps the members feeling young. He says: “What am I, 52? So I’m usually taking care of my kids, being a husband, hanging out with my friends, doing my thing and making a record, all this type of stuff.

“It’s awesome to feel my age. But when the four of us are together, it’s like the median age of all of us just drops and drops.

“We get very silly, very childlike. There’s a lot of adolescent humour. This is a bunch of 52-year-olds trying to make sense of all of it. David Lee Roth or somebody once said, ‘The more people you put in a room together, the lower the IQ gets,’ and there’s definitely a sense of that when all of us get together.

“It’s kind of nice to a degree that you can still feel young and spunky and vibrant. I still think that we feel kind of young and like we have something left to prove. We’re still sort of trying to figure it all out.”

The band this week announced a ‘garage sale’ in the run-up to Record Store Day.