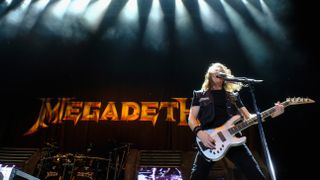 Megadeth frontman Dave Mustaine says he’d be open to a repeat of the ‘Big Four’ tour in 2017 and thinks it would work well with all four bands currently promoting new albums.

Mustaine – a former member of Metallica – has reviewed Metallica’s Hardwired… To Self-Destruct for Metal Hammer and he says it’s “really cool” that they, along with Megadeth, Slayer and Anthrax, have recently issued new records.

The four thrash bands shared a bill for seven shows as part of the Sonisphere Festival series in 2010 and Anthrax bassist Frank Bello recently said he’d love to see it happen again.

And in 2014, Mustaine himself said he was keen on the idea.

Now Mustaine says: “To have all of the Big Four releasing great new records within 12 months or so, that’s really cool.

“Now the big question is whether or not the powers-that-be are gonna allow for the four of us to go and do some more Big Four dates.

“We’ve got a lot of great stuff going on and we’ve got some stuff we’re setting up for Asia and the United States for next year, but if Big Four stuff presented itself we’d probably yield to that because it’s a lot more fun and it’s such an event that it takes precedence over just another tour, so to speak.”

He continues: “When fans get to have four of the greatest heavy metal bands of all time on the same stage, that’s something you can tell your grandkids about.”

Megadeth released their 15th album Dystopia in January of this year, while Anthrax issued their 11th effort For All Kings the following month. Slayer’s 12th album Repentless was issued last year.

Dave Mustaine Q&A: “When I think of Megadeth I think of blood and sweat”