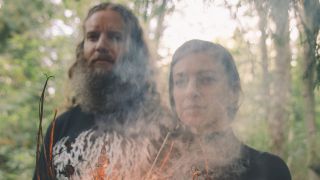 US ambient post-rockers Mamiffer have released a brand new video for All That Is Beautiful. The track is taken from the band's forthcoming new album The Brilliant Tabernacle, which is released through SIGE Records on November 1. You can watch the whole video below.

"I worked with Lauren Rodriguez on this video, and gave her my notes and themes which she interpreted into film," Mamiffer's Faith Coloccia tells Prog. "She was involved in the process on a heartfelt and emotional level as well as a creative one. She helped me create a visual narrative representing the psychedelia and different mind-states of new parenthood and the feeling of being "earth-bound".

"Focusing on the matrilineal connection to my mother, grandmothers and great grandmothers. In the video I dress up in their clothes and jewellery,  I wash their blankets and make their beds. I was attempting to follow in the strength of their footsteps- that when seen as domestic- were silenced and made invisible/mundane- and instead elevate them to the full colour of the present. I wanted to find the power of their souls, and carry that through visuals of where I live, and the land that surrounds our home. Two artists that inspired me in the making of this video and song were Audre Lorde's The Erotic As Power and the documentation of the "earth-body" artist: Ana Mendieta."

The Brilliant Tabernacle can be pre-ordered here.