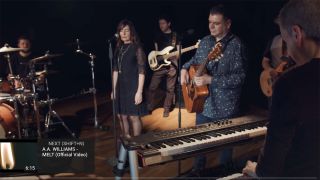 "We really wanted to add a male voice to the chorus of A Gift From God, which is based on the life of actor Christopher Lee, to give it the feel of a duet," explains singer Christina Booth. "John was the obvious choice, having sung on one of my solo albums. He has a great voice and it blends with mine really well. We did the recording remotely, but we were lucky to be able to shoot the video just before the lockdown was announced in March. That was the last time the band was together as a unit and we're all missing performing live, especially with all these new songs."

"We've been getting a great reaction to the album so far, and we can't wait for everybody to hear it, finally," adds mainman Robert Reed. "Lots of people have mentioned that its return to the style of our first two albums, Revolutions and Seven. Those albums were written with a feeling of real innocence that I've tried to recreate on the new record. It's been great to really go for what I think is a classic Prog album, made with modern technology. Although, as always, it's mainly about the song... the song is king !"

Masters Of Illusion is released today, along with a very limited bonus CD The Lost Reel which will feature 74 minutes of alternative mixes from the new album plus some remixes from the back catalogue.