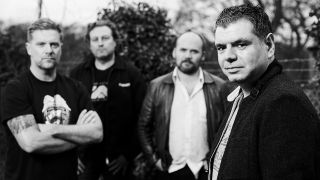 Lonely Robot have released a new video for Keeping People As Pets. The song is taken from the band's new album Feelings Are Good, which was released last Friday on InsideOut Music.

"Feelings Are Good is a bit of a departure from the first three Lonely Robot albums or ‘The Astronaut Trilogy’ as it has now lovingly become known," says John Mitchell. "On Feelings Are Good, I wanted to explore more personal themes and the songs are very much about individual experiences and narratives that I believe had been the cornerstones, good and bad, to my life. The long tall and short of it is that we’re back on planet Earth, and I have a personal lyrical axe to grind!”

"The artwork is meant to be a little disturbing," he adds. "The closed eyes and taped over mouth are supposed to represent how people are very guarded with their emotions and what better way of emoting them than through the windows to the soul and the smile."

Prog Editor Jerry Ewing recently conducted an interview with Mitchell over the Zoom video conferencing platform. You can watch the Zoomcast here.

Feelings Are Good is available as a Limited Edition CD digipak, gatefold double LP+CD and as digital album in both 16 & 24 bit versions (all including two bonus tracks).