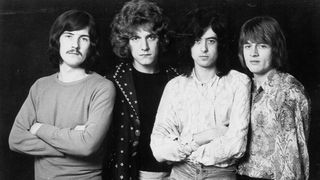 News of the book first came to light in December, when it was revealed on Led Zep’s Facebook page. Now publishers Reel Art Press have released further details and opened pre-orders ahead of its October launch.

A statement reads: “Led Zeppelin By Led Zeppelin is the first and only official illustrated book to be produced in collaboration with the members of the band.

“Celebrating 50 years since their formation, it covers the group’s unparalleled musical career and features photographs of Jimmy Page, Robert Plant, John Paul Jones and John Bonham on and offstage, in candid moments and in the recording studio.

“This definitive 368-page volume includes unseen photographs and artwork from the Led Zeppelin archives and contributions from photographers around the world.”

Late last year, guitarist Page promised “surprises” to mark the anniversary, while it was revealed in January that their live album How The West Was Won will be reissued on March 23 via Atlantic/Swan Song.

The Last Days Of Led Zeppelin: In Through The Out Door