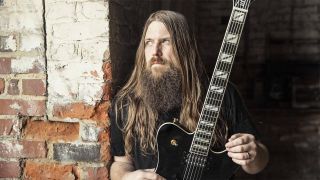 Lamb Of God guitarist Mark Morton’s debut solo album, Anesthetic, might blindside fans of his regular band. For starters, it's a departure from LoG’s groove-metal pummellings. And then there's the eclectic guest list of singers and collaborators he’s pulled together – everyone from Papa Roach’s Jacoby Shaddix and Alissa White-Gluz of Arch Enemy to Alter Bridge’s Myles Kennedy and Mark Lanegan of cult grunge heroes the Screaming Trees appears. But the big talking point is that the album’s opening track, Cross Off, features what might just be late Linkin Park frontman Chester Bennington’s final piece of recorded music. We talked to the guitarist about how the album came about – and just how he managed to pull together an impressive roll-call of A-list musicians.

Did you have bits and pieces lying around from Lamb Of God sessions, or was it written anew?

"I make little demos and scribble lyrics out and that kind of thing. And then a lot of times I’ll sift through that an evaluate if it’s appropriate for Lamb. And if it’s not, it goes into a different pile. Well, that pile started getting a little bit tall. So that was the genesis."

Do you remember starting it?

"It’s usually in between touring cycles, it’s usually when I’m at home. There’s not a lot of room on tour to set your stuff up, because you need your computer and your guitar and all that kind of stuff. There’s not a lot of room or privacy to do that. But at home, a little studio that I set up there, and whatever’s on my mind, whatever’s in my head, a lot of times it’ll depend on what I’m listening to, that kind of thing. But it’ll just kind of spur these ideas."

Let's talk about the guest vocalists. Did you have all these people in your phonebook?

"No. A few folks I did, but there’s a lot of people on this, like Mark Lanegan. I’ve never met Mark Lanegan. But he’s one of my favourite singers. I’m a huge fan of his Bubblegum album. It’s one of my favourite albums. I love the stuff he does with Queens Of The Stone Age. I’m old enough to remember the Screaming Trees… I love that stuff. Just to reach out to him and have him go, ‘Well send me the song’, and he got the song, and he’s like, ‘Yeah I’ll do it’. It’s cool. I still don’t know if I was on his radar or not – I think he just liked the song."

"Ellefson made a lot of sense. Josh Wilbur, the producer on the project, he prompted me – I don’t want to say insisted – but he really was a big catalyst for me to do a couple of metal songs. Because initially I was like, 'I’m not gonna do any metal, I do metal with Lamb, that’s the metal I do, I’m not gonna do metal any better than I do for Lamb, because that’s Lamb Of God, it’s very important to me.' But Josh kind of disagreed and said, 'Your fans are gonna wanna hear you do metal'. For people that are fans of Lamb that wanna check this out, they wanna hear some heavy metal, so let’s do a couple of tunes. So we did. And when I conceded to that…

Ellefson’s just great. I’m a big Megadeth fan, especially of the early stuff. He’s such a nice guy and a great player, and we were friendly. I’d say we were friends. He was in my phonebook. He was willing to do it, and he came out and did it. Same with Chuck Billy. Chuck Billy and I have toured together a bunch of times, he’s been to my house, he’s played Candy Land with my daughter on my back porch, he’s a friend. But he’s also Chuck Billy from Testament. Randy [Blythe] is one of my best friends in the world. I put him on a track. I thought it was cool to do the kind of duet, the juxtaposition of him and Alissa [White-Gluz]'s voice together. Randy was easy, he didn’t want anything, he didn’t ask for anything."

Who surprised you most in the studio?

"Chester Bennington. He just had a lot of creative input at the ready when he came into the studio. That was my initial like, 'Wow'. He had told me he really liked the song, and we had communicated, but I’d never really hung out with Chester until when we started tracking. I was really impressed for a guy at his level, at the place in the career he was at, someone of his stature and celebrity, to have that level of humility and commitment to come in there and treat this like it would be a Linkin Park song, or his own song or whatever. I was pretty blown away by that. And it was immediate. Fifteen minutes after we met, we were standing over a table, one on either side, each with scraps of paper and pencil, crossing off words and trying different rhyme schemes and stuff. And then after the track was laid out, then we took a breath and started talking about more personal stuff – real-life shit. And yeah… he surprised me the most."

How did you guys connect in the first place?

"I had my people call his people! It was one of those things where we were listening to the song like, 'Who in our world would we have singing this?' And Chester was the name that came out. So we almost didn’t try, because it’s Chester Bennington, he’s such a superstar. We were kind of like, 'Come on, we can’t get him.' But if we hadn’t tried, we wouldn’t have got him, so we tried, we got his ear, I was surprised to find I was on his radar and all, but through Lamb I was. He heard the song and he was in. It is a really good song. I’m sorry, I don’t know if I’m allowed to say that, but it’s a good goddamn song, right? We had to iron out a couple of things legally and all that kind of stuff, but on the creative side, he was in from the jump. And I didn’t realise how in he really was, but when he showed up I did, and that was humbling for me.”

Could you talk us through some of the lyrics on Cross Off?

"To me, it’s really about codependency. It’s about breaking that cycle of codependency, or dependency. It kind of parallels. Because codependency and dependency are really kind of the same thing, right? It’s just maybe a different living person or an inanimate object, but either way you’re obsessed and dependent on something and the feeling you get from something, and chasing that. It’s about breaking that cycle and breaking that mode of self-destruction, erasing all of that, crossing all that off, and becoming into your own again. There’s also a regret component in there too, like a lot of us waste a lot of time trying to fit ourselves into some different mould other than what we should do. I don’t know if I’m being too vague… it’s about relationships ending, and that relationships can be with a person, it can be with an addiction, it can be with a time and place in your life. It’s just kind of about wiping the slate clean and starting over."

Anesthetic is released March 1 via Spinefarm. It's available to pre-order now