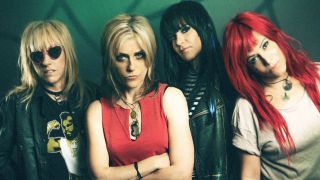 It’s been revealed that L7 will release their first new music in 18 years this autumn.

Vocalist and guitarist Donita Sparks, guitarist Suzi Gardner, drummer Demetra Plakas and bassist Jennifer Finch’s last album was 1999’s Slap-Happy. They went on hiatus in 2001 but reunited in 2014 and have been touring ever since.

Now, it’s been announced that they’ve been recording at Hollywood’s EastWest Studios with producer Billy Bush and will launch two new singles later this year via Don Giovanni Records.

The first track will arrive on September 29 to coincide with the worldwide release of their career-spanning documentary L7: Pretend We’re Dead. The film will then launch on DVD and Blu-ray on October 13, featuring bonus material.

Further details on the two new tracks will be revealed in due course.