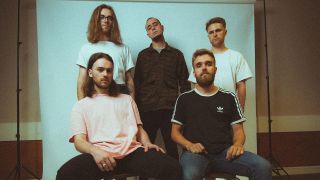 British prog rockers KOYO have released a video for new single Ostracised. You can watch it in full below.

"Ostracised is so much about the juxtaposition between the heavy, intensity of the verses and the disco, danciness of the choruses, so it was obvious we needed to capture that in the video," singer Hue Edwards tells Prog. "The idea for the verses was to incorporate almost horror movie-esque sequences, with claustrophobic body cam shots and Blair Witch type stuff. And then in the choruses it lights up and we’re all suited up in velvet, and Dan has a moustache.

"The building we filmed it in, Abbeydale Picture House in Sheffield, was perfect as well. It’s an old cinema from the early 20th century. All thanks to Joe Collinson of course who did our last video for Circles. We were so happy with how that one turned out as well. Getting a music video right for a DIY band can be tricky but Joe really smashes it."

Ostracised is taken from the band's forthcoming second album, which is due out next year.