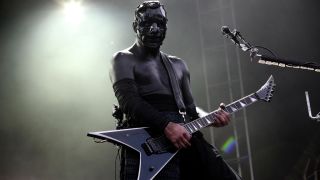 The follow-up to 2011’s Gold Cobra has been in the works for three years, but no firm release date has ever been mentioned. The singer says on Twitter: “Recording in Hamburg, Germany, for the next few weeks Stampede style.”

Borland wasn’t aware of the development. He told TeamRock: “That’s news to me. Oh boy! I’ve recorded 25 songs so I don’t know which ones he’s working on. I’m excited to see what it sounds like.”

He added that he’d laid down his tracks “a long time ago.”

The guitarist is in the UK to play with his other band Queen Kwong at The Great Escape Festival tonight (May 14) then in August at Reading and Leeds – where where Bizkit will also perform.

On his role with the group fronted by Carré Callaway, Borland said: “It’s the best, moving our own gear. Everything is DIY. It’s been really cool for me to kind of morph and change into the guitar player that this band needed, and let go of things that I do normally.”