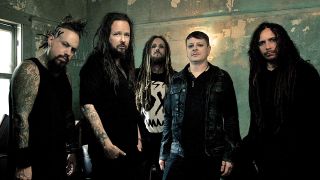 How did you manage to strike such a strong chord with people?

Jonathan Davis (vocals): “We came up the right way. And it felt like we had a little gang in every town. We got to where we wanted to go through word of mouth – the people that loved us were obsessive! They’d make their friends listen to us. It wasn’t until Follow The Leader [1998] that the MTV bullshit happened to us, and that catapulted us even further. Back then, the metal crowd had leather pants and spiked bracelets and all that shit, and we started to see these kids wearing Adidas and tracksuits. It totally changed the scene. It was beautiful.”

Was it difficult that the audience connected to you through your lyrics?

“It was tough, because at that time I was a raging drug addict and alcoholic. This stuff just numbed me from the stuff that was going on outside. The only way I could really feel like I could tame this feeling inside of me was through my lyrics, and I had no idea that people were going to connect so heavily with that. It’s really hard to put all that on someone while they’re in the midst of this addiction. But a lot of people were having the same problems as me. It’s taken years for me to realise that I’m actually giving people hope, and it’s a positive thing.”

What’s been the hardest time for Korn?

“The worst thing has been when Head left the band, and the best thing is when he came back. I mean, he had to go do that or he was going to die. I love the guy and he’s an amazing guitarist, and we needed him. We’ve got Munky and Head, the left and right. You lose one of them and it’s like having your right arm chopped off. But we went there, and he found God, and he got himself clean, and saved himself and his daughter. And I have nothing but love and respect for him.”

How different are you now from how you were back in 1994?

“It’s night and day. We’ve been together for 22 years, and somehow it’s made me better. Some people paint, they write poetry, or they go and beat the shit out of a punchbag. I do it with a pen and a microphone. If you listen to your soul, then we have dark and difficult things inside all of us, and I get mine out to help myself and hopefully help other people. That’s why we write, that’s why we play, that’s why we tour every fucking place on the planet. It’s a time for us to let loose and come together and get all that shit out.”

The Fall and Rise of Korn