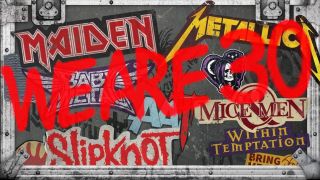 For 30 years, Metal Hammer has been defending the faith and repping for the biggest and baddest bands on the planet. We’ve seen glam metal, thrash metal, nu-metal, prog metal, kawaii metal, metalcore, deathcore, hell even crunkcore, and we have survived to tell the tale. In the new issue of the greatest metal magazine on the planet, we talk to the biggest names in the world of metal and much much more.

The new issue of Metal Hammer is available to order now, and comes with a FREE covers CD featuring Korn, Devin, and Asking Alexandria!

To celebrate our 30th birthday, we have 30 brand spanking new interviews with 30 of the biggest and best bands on Earth right now.

We talk to Metallica about their legacy, the impact of Master Of Puppets, their “wobbly years” and the band’s highly anticipated new album Hardwired… To Self-Destruct.

Iron Maiden’s Steve Harris reflects on the ups and downs of being in one of the best bands of all time, over the past three decades – from metal being “weak at the knees” in the ‘90s, to the departure of Bruce Dickinson, to where Team Maiden are in 2016.

Slayer’s mainman Kerry King discusses his band’s place in heavy metal history, overcoming the tired tirade of hair metal bands surrounding them. He also looks back on the impact of Reign In Blood and why they simply can’t go on forever.

Machine Head have been unstoppable in their lifetime, and Hammer has been there every step of the way. Their fearless leader Robb Flynn takes us back to the early days in San Francisco, their dalliances with nu-metal, and the messages behind some of the band’s hardest hitting lyrics.

As one of the more controversial figures in our world, Oli Sykes has led his band from the dirty deathcore dives of Yorkshire to arenas and festivals around the world, playing bombastic, anthemic metal. But how does the Steel City boy cope with fame, and where did Bring Me The Horizon’s rocket to success come from?

Perhaps the biggest success story in Hammer’s lifetime is Slipknot. Rising from the darkest corners of Iowa, the band are a behemoth in metal with number one albums, sold-out tours and their own freaking festival! Corey Taylor casts his mind back to the early years, the passing of Paul Gray and their first time headlining Download festival.

But that’s not the only thing we’re packing in the new issue… we have a WORLD EXCLUSIVE covers CD and it’s FREE! Would you like to hear Korn covering Faith No More? Asking Alexandria covering Slipknot? Sabaton covering Manowar? Katatonia covering Judas Priest? Devin Townsend covering Accept? Hacktivist covering Limp Bizkit? THEN YOU NEED THIS IN YOUR LIFE!

And it comes with a free Avenged Sevenfold book! Across 98 pages, A Brief History Of Avenged Sevenfold tells tales of Waking The Fallen, M Shadows meeting Slash, their Take Action Tour, headlining Download festival and much much more.

Our 30th birthday issue is in stores NOW! And is available to order online right this second!

You can also instantly read the articles from issue 288 of Metal Hammer and dive into the back issues right now on TeamRock+. And experience the interactive digital edition for your iPhone and iPad or Android device.