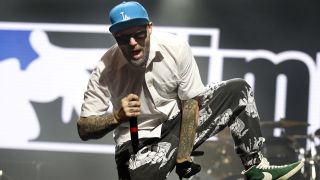 I believe you are born with a core you carry for life. And from infancy to maybe six or seven you are so impressionable that it probably moulds your neurosis and sets a path for you. Being a kid and going through that coming of age was definitely not a good period for me. It was brutal and violent, and I found myself a victim of lots of different abuse and being powerless for a long time… until I got a microphone and put together a band.

The first time I saw Wes he had ponytails and girly half-shirt on. He was playing in a band called Cronk and was like Les Claypool on guitar, with a little Manson in there. So he joined and the other guys taught him the songs. I actually met Wes for the first time at our first gig! It was wild but it worked. I made up vocals on the spot! We never took time to consider friendships, that wasn’t part of it. It was just about the magic that happened when we were together… none of us were ever friends.

I always knew the guy in the red cap was not me. I’m Dr Frankenstein and that’s my creature. Being a breakdancer, a graffiti artist, a tattoo artist and liking rock and hip hop was too much; it was a conscious effort to create Fred Durst and eventually I had to bring that guy out more than I wanted to. It took on a life of its own. I had to check into that character – the gorilla, the thing, the red cap guy. It’s a painful transformation, but I do it ’cos that’s what I was taught to do when you have people pulling at you.

Every once in a while you gotta pick yourself up and say, ‘fuck it’. When I started making music, it felt empowering. A lot of things came from my scars. When music stirs things up, they come out. But it’s all wound together: instead of soaking in and loathing in all the abuse, I’ve endured. I feel like a survivor.

I never know what I’m saying, I just say it. So maybe my lyrics weren’t so thought out. And though I think I’m aware in the moment, I’m really not. I always wanted my lyrics to be for people who felt maybe like I did, for victims. I should have made it more blatantly obvious because some of our audience and our fans were not those people. They were the nemesis, they were the opposite, they were the people that I despised and if I change anything it would probably be to make things a little more clear about where I was coming from, trying to segregate the bullies from the victims. The irony of my life is on a stupendous level.

I never attach myself to anyone emotionally. It’s like there’s always an agenda with people. I am a loner because I knew it was always about the success or popularity or whatever. It’s hard to trust anybody and I never did. Unfortunately, I just became more of an isolationist.

I never had any money in my life and now I can buy everybody. I can buy them beer, I can pay for the tab, I can treat everybody. That was just my thing – treat this like it’s all temporary. I’m getting paid to do this, so let’s all have some fun. And because our type of rock was kinda cheeky as well as aggressive, I ended up being around people like Steven Tyler or Hugh Hefner. I got thrown into that world and those were the people I was around. It was a unique time, crazy with paparazzi – in LA you couldn’t go any place where the fun was without them being there. I didn’t think about how other people might look at it. There was no book or mentor saying, ‘Hey Fred, you gotta remain super-cool, now we gotta do things that make people like you.’ It was like I was on my own and I always have been.

I’ve been treated like a piece of shit since I was born. Why should I start caring now? All the haters are shallow. I’ve always treated people good – I never start shit. I reacted a few times but evolved, like when you head into your 30s and go, ‘Aah.’ You learn not to be so reactive because you can’t take back what you’ve done, you can only use it as a learning experience.

People always just wanna talk about Britney or Christina. What’s the problem? Because they make a type of music we aren’t allowed to like? Or you think they are the nemesis of what our music is about? Why segregate? Why be so musically fuckin’ racist? What do you mean, I can’t hang out with these types of people? Clearly I didn’t give a fuck, which fed a lot of it, too. I mean, someone that’s not going to give in and apologise… it’s gonna make people carry on talking.

Moshing was never about hurting other people. I used to go to Minor Threat, GG Allin and Black Flag concerts and it was about this experience of music taking over. I still feel like it’s that way but sometimes it isn’t. Some people are meatheads, just using it to hurt people. I’m sad that maybe what happened at Woodstock was on a level I couldn’t comprehend. I hope those who were scarred from it found some sort of light. I really hope so.

I’m an early 80s Hip Hop kinda guy. When they came out, Cypress Hill and Wu Tang Clan were microphone masters! At the same time I was listening to Napalm Death and Deicide, plus I was into 80s New Wave like Psychedelic Furs and Bauhaus. I’m a fucked-up person with so many emotions and shades of grey, it could never be just one style.

People would be very surprised at how metal Lil’ Wayne is. He’s a fuckin’ rocker, man! He’s not gonna alienate what he’s known for, but the metal community would be surprised if they spent a day with him! We bonded while skating. Sometimes we’d never talk, just skate for hours, and eventually the dialogue came along.

There was a demand for us to play Big Day Out 2001, so we filled it. When we came to play we said, ‘The barricades aren’t right – people are gonna go crazy so we’re not playing.’ And they go, ‘No, you’re goddamn wrong. You are playing – you’re the headliners.’ And we go, ‘No, you gotta have the right barricade.’ The promoters who owned Big Day Out at the time were rude. The police came and it turned into this huge thing, with them telling us, ‘There’s gonna be a riot if you don’t play and if that happens, we’re arresting you.’ [Editor’s note: Limp Bizkit played, and a 16-year-old fan was crushed to death.]

When someone loses their life at your show, you carry it forever. No band wants that to happen. You can only think of yourself or your own children. But it happened and I hope a lot of people learned from it and we’ll forever be sad about it. Woodstock was another story of these kinda promoters. All they were doing was glorifying nu metal and all types of painful presentation. Artists with torture, singing about angst and vengeance – they marketed Woodstock around it. It was a Limp Bizkit concert on steroids, just insane. You see people surfing on plywood and think, ‘That’s genius, I gotta do that!’ You don’t realise they’re ripping it off the scaffolding. You’re in the moment and thinking everybody’s enjoying it. Then you walk off stage and get told, ‘Hey there’s a riot, we gotta get you outta here!’ We had no idea anything like that was happening, man.

I try no to think about the what ifs. If I didn’t give Fieldy that tape, I would’ve tricked somebody into checking us out. I was calling labels, pretending to be other people and faking my voice. I’d call Geffen and ask for Butch Vig. So then I figured what an A&R person does, so I’d say, ‘Hey I just got off the phone with Butch and he really loves this band Limp Bizkit and he told me I need to talk to this A&R person.’ I had no idea that’s how it worked – one A&R guy finds out about something and wants to beat the others to it. It’s like find out who it is, chase it, schmooze it and get it. I was just playing dice!

For more on Limp Bizkit and their fall from grace, then click on the link below.

Limp Bizkit: "We Got too Big, The Label Milked Us, We Fell Apart..."