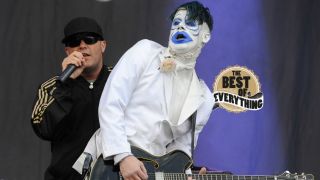 Led by their fiercely ambitious frontman Fred Durst, the band – whose line-up was completed by guitarist Wes Borland, bassist Sam Rivers, drummer John Otto and former House Of Pain man DJ Lethal – quickly won fans all over the world with their unique blend of metal riffs and hip hop.

One such fan was Kenta Koie, whose Osaka-based electro-metallers Crossfaith toured with the Jacksonville quintet in 2014.

“They’ve been my heroes ever since I was young,” explains Kenta. “It was one of the best moments of my life when we toured with them – Fred Durst was the nicest guy…”

With that in mind, we thought we’d task Kenta with picking the 10 best tracks from their back catalogue. Here they are, in no particular order…

TAKE A LOOK AROUND (Chocolate Starfish and the Hot Dog Flavored Water, 2000)
“This was the very first song I’d heard by Limp Bizkit. When I was a student, I would watch MTV a lot and this song and video blew my mind. I’d never listened to this kind of music before and I thought it was super heavy.”

MY GENERATION (Chocolate Starfish and the Hot Dog Flavored Water, 2000)
“My old band would play this song. We quickly learned that Limp Bizkit songs are very hard to cover. It’s simple to play, but it’s hard to express their groove, so it took a long time to perfect it. But I love this song.”

9 TEEN 90 NINE (Significant Other, 1999)
“I love the Significant Other album. The first record I’d bought by Limp Bizkit was Chocolate Starfish and The Hot Dog Flavored Water, but I really got into the second album. This is one of my favourite songs from that. 9 Teen 90 Nine is so heavy and I love the breakdown.”

READY TO GO (2013)
“After Results May Vary, I was a little bit disappointed by [the 2005 follow-up] The Unquestionable Truth (Part 1). A lot of people were, I think. They then released Gold Cobra! I love that record, but I prefer Ready To Go which came out in 2013. The song made me excited to listen to their new album [Stampede Of The Disco Elephants], but it hasn’t even came out yet!”

BRING IT BACK(Gold Cobra, 2011)
“I actually didn’t buy Gold Cobra after Results May Vary. My preference for music is more towards metal and the first time I listened to Bring It Back…it was weird. All I could think when I first heard the song was, ‘Who’s that?’. I thought Limp Bizkit were going to be more mellow or more into slow songs, so I was really surprised to learn it was them!”

EAT YOU ALIVE (Results May Vary, 2003)
“This is the best track from Results May Vary. Some people hated the old guitarist Mike [Smith], but I love his playing and Eat You Alive is super, super heavy. I love the video and the concept, too.”

ROLLIN’ (AIR RAID VEHICLE) (Chocolate Starfish and the Hot Dog Flavored Water, 2000)
“I don’t think I need to explain how good this song is. I fucking love it. It’s just one of the best party songs ever recorded.”

FAITH (Three Dollar Bill, Y’all, 1997)
“This has to be the best cover of the 1990s, I think. It’s super crazy – who would expect Limp Bizkit to cover a George Michael song? The first time I heard it I was laughing while I was moshing in my room.”

Kenta Koie was speaking to Chris Cope. Crossfaith’s new album Xeno will be released on September 18 through UNFD.

Limp Bizkit: Fred Durst From The Inside