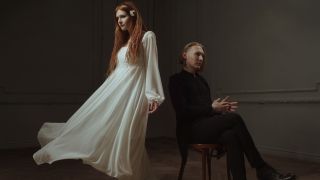 Iamthemorning have released a video showcasing their song Six Feet.

The track has been taken from Marjana Semkina and Gleb Kolyadin’s new album The Bell, which launched earlier this month through Kscope.

The video for the live chamber recording was directed by the duo’s long-time collaborator Eggor Kree and filmed at Lendok Studios in St Petersburg.

Explaining the inspiration behind both Six Feet and The Bell, vocalist Semkina says: “My love for all things Victorian started with a fascination for the Pre-Raphaelite Brotherhood. One of the founding members and one of the most famous British artists, to this day, is Dante Gabriel Rossetti.

“The person, maybe less well known was the artist and poet Elizabeth ‘Lizzie’ Siddal, who was also the wife and muse of Rossetti. The couple’s history is quite heart-breaking and served as a sort of inspiration for the song.

“Theirs was a tale of a toxic relationship filled with heartbreak, infidelity, constant manipulation and laudanum addiction – all of which untimely resulted in her death at the young age of 32.

“After her death Rossetti, the husband overwhelmed by grief after the death of his beloved, put a notebook filled with his unpublished poems into her casket – she was the inspiration for most of them it’s right they should rest in peace with her.”

Semkina continues: “Several years later, his manager decided it was a terrible waste of good material and suggested an exhumation to retrieve the valuable works! Rossetti refused to be present at the process and later he officially requested to not be buried at Highgate, where his family and Lizzie lay, because he thought she'd haunt him forever – a reasonable thought I certainly would have!

“To calm Rossetti's conscience his manager told him that when they opened the coffin, she was just as beautiful as on the day of her burial, with her pale skin and bright copper hair which had continued to grow and filled the entire coffin with her burning red locks.”

She concludes: “My story, however, is a little different. I wondered, what if he hadn’t waited until she died and instead decided to bury her alive once he tired of her? And here the dark story begins; she wakes up and realises what has happened.”

Iamthemorning are currently preparing to head out on tour with Riverside from next month in support of The Bell.

Iamthemorning: The Bell
Iamthemorning return with their new studio album The Bell. The follow-up to 2018's Ocean Sounds features the lead singles Ghost Of A Story, Song Of Psyche and Six Feet.View Deal