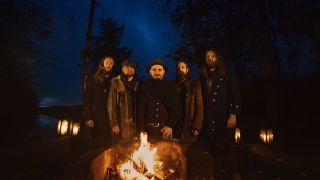 Psychedelic forest folk-rockers Hexvessel have premiered their brand new single Billion Year Being with Prog. You can see the whole video below.

The song is taken from the Anglo-Finnish proggers forthcoming new album Kindred which will be released through Svart Records on April 17.

"For us there’s only one temple," says singer and songwriter Matt McNerney. "Be All and End All. There’s only one religion and one spirit that takes on many forms, and that is the planet earth. This is a deep-earth rock spell, telling your reality tunnel to go fuck itself. Listen, descend, dissolve.”

Kindred is described as Hexvessel getting "back to their progressive and monumental earth-roots as never before, as if something new has been slipped into their tea, throwing fuzz filled riffs and cascading organs down a fresh rabbit-hole in a Mahavishnu Orchestra, Pink Floyd, Bo Hanson kinda way."

Kindred was recorded at the bands own Tampere studio (where they recorded 2012's No Holier Temple) and mixed in London by John Davis (Led Zeppelin, Lana Del Ray).