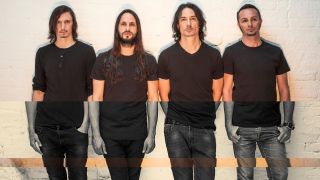 Gojira members Mario and Joe Duplantier say they’ll continue to speak out about environmental issues through their music.

The band are preparing to release their sixth album Magma on June 17, and say everyone has it in them to make a positive impact on the world.

Drummer Mario tells Metal Hammer: “We’re no eco warriors but we’re conscious human beings, and we think about life, and how we’d like to live – those thoughts have resonance.

“It’s not only about the ecology of nature, it’s also the ecology of human beings. We all have a responsibility to think and do things that enrich our word. It’s a chaotic world, with an economy based on fraud, and politics based on corruption, but as ugly as the world is, we can change it.”

Frontman Joe says they were wary of “putting out bad energy” when writing tracks for Magma – but still felt they had to highlight issues currently affecting the world.

He continues: “People bitch about the world but do you give up? ‘The world is polluted, so I’m going to pollute more. Everyone steals, so I’m going to steal more.’ We create the world, we create our environment.

“You hear people saying, ‘They want us to’ when talking about the government or the ruling classes. But ‘they’ is ‘us.’ If I think people complain too much, I should complain less. If I think people are too greedy, I should be less greedy. You are part of the people, so if you make a little more effort, you can effect change.

“70% of our planet is water, but because it’s not our natural element, that’s the environment we rape, pollute and destroy, without any restrictions. How can people not get annoyed about that? Why would anyone think that’s something easy to ignore?”

He adds: “We’re not actively confronting the people who do this, but as long as we have a voice, we’ll continue to speak up. It’s a decision to think positive. We will never give up, even if the world seems fucked.”

The full interview with Gojira is in the latest edition of Metal Hammer, out now in print, online and via TeamRock+.

Gojira will head out on the road across the US with Tesseract later this year, following their appearance at next month’s Download festival. They’ll also been confirmed for the Metal Hammer Golden Gods on June 13 in London.